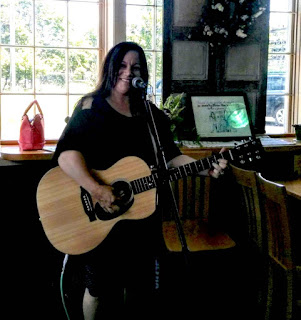 After an almost 5-year break from performing and writing songs, Sheli Monacchio has been slowly dipping her toe back into the New Jersey music scene.  She is in the process of recording her long overdue follow-up to the critically acclaimed 2011 “Kansas” release and are starting to take shape, with a spring 2018 release date in the planning.  The songs she is writing for the record are rooted and sprung from an awe-inspiring place of becoming a mother for the 3rd time.  The spark that started this creative period has also struck a chord with her to perform again and has been doing so steadily in 2017.  In addition to playing her solo shows, she has also been playing as often as she can with her daughter and favorite musical partner, the immensely talented Melissa Anthony Dimura.
Sheli Monacchio (formerly known as Sheli Aarden) has been a fixture on the New Jersey “coffee house” circuit since 2004. She has multiple Asbury Music Award nominations to her credit, as well as a JAM (Jersey Acoustic Musician) award for best folk-act for her collaborative effort with her husband, The Monacchios. From her debut album, Digging For Daylight, to the aforementioned Kansas LP and her work with The Monacchios, Sheli has established herself as one of the most honest, thought provoking and endearing songwriters around.  Having said that, the writing she has been doing over the last year is coming from a different place.  A place of quiet confidence, with her feet firmly cemented in a place happily unknown, but altogether familiar.  In flight, following her instinct for better or worse to a clearing in the distance that make make for a soft landing.

Link to "Alive Inside"

Posted by Musician of the Month at 3:09 PM No comments: