November Musician of the Month 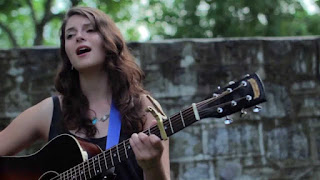 Caroline Reese is an Americana songwriter from Reading, PA. She has released two folk-rock solo albums, "Indian River" (2010) and "Slow Code" (2013), and one EP "The Electric Year" (2014) with her band, the Drifting Fifth.


As a solo artist and with the Drifting Fifth Caroline Reese has toured nationally and opened for artists including Chris Stapleton, Brandi Carlile, Ray Wylie Hubbard, Ben Folds, the Secret Sisters, and Israel Nash. They've been Emerging Artists on Nashville's Music City Roots show hosted by Jim Lauderdale and Taco Bell 2016 Feed the Beat artists. "The Electric Year" was named Y102's 2014 album of the year.


Caroline Reese & the Drifting Fifth released 'Snake Eyes,' the first single off their upcoming album Tenderfoot, on September 7th, 2016. The full album is due out at the end of the year.


Posted by Musician of the Month at 4:43 PM No comments: